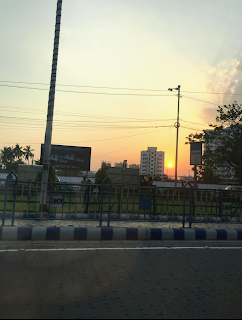 Ah Calcutta!
A truly cosmopolitan city with a heart to match. Calcutta was never very large. The old city ran north to south and was reined in in the west by the river and in the east by the wetlands. The actual city limits were rather compact: no place was too far away!
The other day I was returning from lake town with my daughter and I was telling her how when we were kids there was no Salt lake city and barely a lake town. When we used to go to the airport we passed large tracts of uninhabited land and jungles! One even heard of the occasional dacoity where now there are only houses and buildings! In fact, as I was telling her the site of the City Centre mall in Salt Lake was inhabited by foxes even as late as in 1998! We have a friend who lives right there. At night, standing at his verandah nursing our drinks we would hear the howls!
All that has changed. Now the city sprawls in all directions, (except west, of course, you'll fall into the river) but seems to be bursting at the seams. Some call it ugly, some say it is a jungle. Thing is, it is not much uglier or junglier that any other urban sprawl!
Posted by Ipsita Banerjee at 4:31 PM