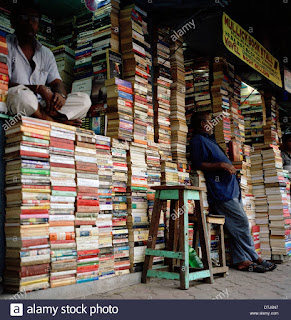 You cannot talk about old Calcutta without a mention of College Street also known as Boi-para (literally, a locality for books). And what a locality it is! It's home to the largest second hand book market in the world and books call out to you from every nook and cranny. As children, when we went there, it was overwhelming. Those days you couldn't get any decent book except in College Street!  The shops in Gariahat or New Market were pooh-poohed by the older generation, specially my grandfather and no self respecting Bengali would pass up a chance to miss a visit! As the name suggests, College street is located near several of Calcutta’s academic institutions, among them, Calcutta University, Presidency College (now University), Sanskrit College and Calcutta Medical College are but a few. When these institutions came up early in the 19thCentury, that stretch of road between Harrison Road (now M.G.Road) and Bow Bazar became a haven for the city’s intelligentsia.
One can spend hours browsing this stretch of road dotted with hundreds of bookshops. And at one time it also was home to India’s biggest publishing houses. The bookstores range from standard brick built affairs to small makeshift stalls made from bamboo, canvas, or even sheets of metal or plastic. Each stall owner can tell you a story that goes back years.  It is said that any book ever sold in Kolkata can be found in College Street. Rare books have been found, hidden between first editions and raunchy thrillers as well as school and college text books.
And of course you have to have sampled the staple of  College Street : the Coffee House. In every Bengali’s heart there is no place that has been loved or romanticised as much as the Coffee House. Right from the first time their eyes met, right to the impassioned speeches and political discussions of their youth, to the afternoons of camaraderie, every father has a story to say, every aunt has a tale to tell. Songs have been sung reminiscing those golden days of youth and who is to say how much poetry has been written or imagined in those halls!
I leave you with a link to a famous Bengali song, “Coffee House-er shei adda ta aar nei, aaj aar nei”, a song reminiscing the carefree languid days of youth:
Coffee House manna Dey

Posted by Ipsita Banerjee at 12:08 PM