Before you go out tonight....

While I was sleeping.

For about three months this year I have been off the radar. My father in law suffered a cerebral stroke in mid-September (as most of you know) and until he passed away six weeks later, I spent almost every waking moment by his side until they frog marched me off the hospital premises. Now after everything is over and I am coming back to the world of the living , so to speak, I find my daughters have done quite a bit of growing up. The whole episode was in any event very traumatic for them.  Not only were they very attached to their grandfather, it was Isha who found him in the bathroom when he had the stroke and ran and alerted us that morning of 16th September. Somehow for a while she blamed herself. I was too busy running circles around the hospital to realise how much it had affected her until one night I found her crying quietly into her pillow and my husband and I gathered her in our arms and gently explained it was not her fault and in fact she had probably saved his life by alerting us when she did. I realised that day that I needed to tune into their lives a little more. Fortunately the puja vacations popped up and I was free once again to stare desolately into the Critical Care Unit leaving my daughters to the care and affection of other members of our XL family. Somehow they managed. I was myself impressed with the sense of responsibility they showed in organising things at home even when we had no maid. Homework was done, studies were taken care of and exams were prepared for without any help or prodding from me. Late at night I would return home and find them quietly asleep, uniforms neatly left on their chairs ready for the next morning. I kissed them goodnight, turned off the lamp and each day I thanked someone up there for looking after them. I had visions of happy, well-adjusted,  disciplined children and was covered in the warm golden glow of motherhood. Somewhere amid all that Isha turned 13  and Amisha turned 12. They did not crib once that their birthdays were low key affairs or they could not have their friends over or that there was no party with the works. They were content with whatever was arranged and never complained. I have to thank the rest of the family and a few friends for making the days a lot brighter than it would've been without them. 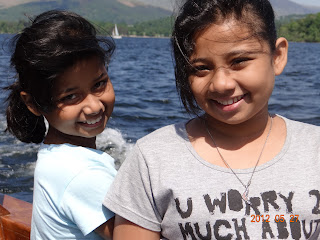 And now that the rigmarole is over, it's like coming back to earth after a three month hiatus. I look around, stunned into silence: that golden glow is tarnished, the vision has rapidly faded. Somehow the girls have changed:
Isha's become a teen-ager. Add to that all the horror stories you have heard about teen-agers. She is more opinionated, more aggressive, more irritable. Her favourite words are "it's complicated,"  followed by "you won't understand". Hence anything you ask her is complicated. She does not ask to be cuddled as much and when she is not fighting with her sister  is content to watch whatever nonsense she watches on uTube or TV. At 7 pm week nights, without fail she begs to watch some shit called "dil dance and dosti"  or whatever and devours each episode of Grey's Anatomy! Once in a while you will call and call and call and she will not reply because she is sitting inside the television and can't hear you. And the phone calls. Even past ten at night (sacrilege, my father would say) a small voice says "Aunty just once please, can I talk to Isha pleeease, it's very urgent?" I growl. I want to ask who has died. But my daughter has run into the loo or the guest room with the cordless phone, obviously, these "complicated" conversations cannot be held in front of a parent!!!! Being naturally talkative, sometimes when she is in an amiable frame of mind she volunteers some information about some school friend she or some friend has "problems" with and I quietly listen, not daring to offer unsolicited advise, grateful that I am being allowed a foot into her complicated world. It's on the tip of my tongue to tell her that if they watched less TV they would realise real life is less drama and more about being who you are and accepting others for who THEY are. But I hold my tongue. Obviously I do not understand. And obviously she does not want me to complicate her life any further!!!
As for the younger one Amisha, THAT I can understand. Or so I thought, until she has now taken to keeping a virtual pet called "Poo"! Imagine, late at night she cuddles up to me on my bed and says "Ma, tomorrow in the morning before you go to Court can you feed Poo a hamburger and wash his bum?" I almost fell off my bed in shock! She is someone who reaches home from school and the phone rings. That friend she had spent the last five odd hours with is calling to tell her that she too has reached home. I do not know what they talk about but she and her little group of four friends drive me up the wall with their constant calls. At least it's not complicated. It only makes me, my husband and the phone bill go through the roof! Amisha, when she is not busy fighting with her sister is creative, she likes making things. Some of them I must admit are quite impressive. So now our house has become the dumping ground for every scrap picture frame, art paper and other knick knacks she picks up from her piano class! Her piano teacher has a picture framing studio at home and happily encourages her creative bent of mind. Only here I find strange packets in the wardrobe stuffed haphazardly so the door cannot close. I take them out. One has about a hundred one inch pieces of wood. The other has bigger pieces. Another has pieces in different colours. The next one has bits of plastic. I threaten to throw them all away. "But I'm making something," she insists, " please let it be." Endearingly, she throws her arms around me, she can be very sweet when she wants something. I surrender quietly.
Yes, I have been quiet lately. Can you blame me?

May I take your leave? 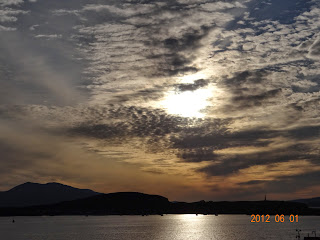 Today, after a long time I sit and try to write. I've decided it's time for my annual piece summing up the year that was. Yes, the words come out slowly, chokingly and I force them out until they emerge, a gooey mass in my palm, much like that tube of oil paint you did not quite recap properly and the top end has hardened.
Yes, yes, I know, the year has not quite ended...three weeks to go. You all have those year ending parties and Christmas to look forward to..... It's just that it just FEELS like it's over, at least for me... so why not let the passing year close a bit early, just this once, for me at least?
The single most important and tragic thing that has happened this year is the loss of my father-in- law. It was sudden and unexpected and shortly after a terrific vacation we all enjoyed in the UK in summer. There were other events, the year had its shares of joys and sorrows, fights and tantrums, I guess, but I seem to have forgotten them just now.  Once in a while those summer vacation pictures come rolling around as my screen saver and I stare at them wishing the days were once more in my hands and I could somehow hold on to them forever. But nothing lasts forever, least of all the people we love. Save in our heads and our memories.
Oh it hurt like hell. Right from that moment when we had to admit him to hospital for the long vigil in silence and desperation to the time when we took him home that last time for his final journey. I can recall each moment of angst and anger, rage and frustration, tenderness and prayer. And now too, although more than a month has passed, I have not gotten used to it. There are no calls to be made in the morning, no one asks if I am home and we are trying to get used to the silence that walks by our side and visits us in the evening. I waver between anger and pain. I rage against peace and insist there is no justice. But even in my most illogical moments I can see both my fathers and my mother-in-law looking down at me surrounded by other dear faces telling me to let go, to forgive, to move on.
So that's what I am trying to do now: move on. My father always said that life is for the living. But I have been ignoring many precious people in my life simply because I've not felt up to it yet. Because I've been busy licking my own wounds and bearing grudges I want to bear. And if there's anything the year has taught me, it's that life's too short and unpredictable. So I am going to try and make the phone calls I have been deferring, I am going to try and open my heart to all the well meaning people who have been trying to make the right noises. I am also trying to find it in my heart to forgive those trespasses on my soul, real and imagined, as I can just hear a voice telling me to "let them do what they want, as long as YOU are true."
Ah, yes, 2012 has been a roller coaster of an year. And like all rides, it has to end. I plan to spend the year-end quietly holed up in this remote hotel in Darjeeling far away from the hustle and bustle of the Mall. Yes, we were supposed to visit in October, Baba was very eager to go. But we had to cancel. I know I will find him (and all those that I love and who are no more) waiting for me there in the silence of the hills, in the sun as it reflects off the Kanchenjunga, in the peace of the morning mist.
And I shall take that oil-paint in the palm of my hand and set about painting this white canvas into vibrant life and colour.
Best wishes for 2013, everyone.
Posted by Ipsita Banerjee at 4:27 PM No comments: