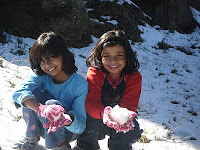 2009
Okay, it’s that time of year again…time to do my annual recap of the year that was giving a low down on the highs and lows of the year basically letting you catch up on what’s been happening in my life…whether you want to know or not!!!!
So let’s see, where do I start? 2009 was a year full of trials…but there were good times too (only I’m trying very hard to remember what they were!)…well, it was one of those years, I guess. Work was good, (let’s start with something safe…) kept me appropriately busy and out of trouble, sometimes busier than I would’ve liked to be, but hey, I’m not complaining. I had to travel a bit and I thoroughly enjoyed the “time out”… a luxury I can ill afford! There were the usual share of disappointments but all in all it worked out more or less. I’ve become quite the juggler… home, kids, work, cooking, family, extended family etc…. only sometimes I feel the jesters cap is missing!
The girls have been busy…. Piano, roller-skating, badminton, singing, studies….they rarely have time to breathe! And I like it that way!! Isha wishes she was learning silly Hannah Montana songs instead of classical and watching TV all the time instead of learning Arithmetic tables but those are minor hitches as far as I’m concerned….at least now she’s learnt the words of the only MJ song I like (Will you be there?) and I’m hoping she’ll sing it for me one of these days…only as any Mum will tell you, kids never have time for such things for their “uncool” mothers! As for Amisha, she loves roller-skating and badminton and ice creams and sour sweets that make your teeth rot and fall out…but hates her studies and finds every excuse in the book to be in the loo when she should be studying! Isha had an appendix operation last March and milked it for all it was worth when she wasn’t allowed to lift heavy weights or do any strenuous activities for 3 months!!!!!
But the girls had some serious growing up to do, their beloved grand-mother passed away last year. She spoilt them rotten and the day she died they were heart-broken, their first encounter with something so final as death….but kids are more resilient than we give them credit for, they have neatly interwoven her memories into their lives. For us too, it was a huge jolt. Ma was more to me than just a mother-in-law and I do miss her calming presence. For Amitesh and Baba she has left much more than just a void and it’s something you can see in their eyes. For me I have just adjusted myself to having more to do…..although I seriously doubt I do anything of worth! We went though the motions and rituals and at every step I was faced with the girls’ pointed questions to which I had no answer. It prodded me to ask myself about the after death state of being…..is it infinite and peaceful floating in eternity or are we doomed to tuneless chants in a dead language! Whatever the case may be, it’s unlikely I’ll know very soon. But faith is a very strong emotion, specially if you have it!
I lost my uncle too, my Dad’s brother… and our family lost a much revered priest. I was sad but somewhere along the way I seem to have lost the ability to cry…grieving has become such a continuous process sometimes…..after committing the man I loved most in this world to the pyre I wonder if there are any tears left! And yes, I do dredge up the past. I look at it often, mourn the memories or smile at them as the case may be and return to my life……
Sadly though, the feelings remain. The loss, the anger, the frustration, the emptiness and the vacancy of nothing to look forward to. Yet there is love and laughter and the joy of friends and family who stand by us through it all.
That has been one saving grace, the support of family and friends. Near and far, they all reached out…some even came as a surprise…but I don’t know where we would’ve been without them. So God bless you all!
The year ended beautifully though, we were in Bhutan on 31st December and awoke to a city blanketed in snow. It was beautiful watching the flurries of snow as it fell. As I watched the snow and heard the girls’ laughter around me I was filled with a sense of peace and hope. May this year be like that, peace filled and as quiet as you wish it to be. May all your wishes and dreams come true and may you find contentment and see the light surrounding you…I hope to.
Quietly,
Posted by Ipsita Banerjee at 2:25 PM No comments: Links to this post