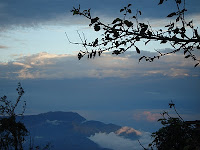 Ok, here goes, time for my annual folly, a recap on the year that was. Well 2010 started off peacefully enough, we returned from a holiday in Bhutan and slipped back into our lives…quietly. Ma passing away in 2009 meant the monthly rounds of rituals and pujas praying for her soul….I’ve never been a believer but once it was all over in October, I found myself missing it all…..yes that whole gamut of shiddha chaal and kaanch kala and pindo business and the works…..it brought the whole family together, and for a little while, each month I felt Ma was actually sitting and laughing with us! Yes, she’s someone I miss and time does not heal, it just softens the edges and keeps us warm….the same holds true of Baba…not a day passes when I do not think of him and wonder if he’d approve.
Life went on amid all the chaos, Amitesh’s youngest brother got married in January and in the wee hours of the very next morning another brother was blessed with a little blue bundle of delight! So we had two additions to the family in 2010. Then came the usual routine and our humdrum lives continued, amid it all, we managed a few holidays, all of which were great. Of course the highlight of the year was our trip to Spain. We took Amitesh’s father with us, the first holiday he experienced as a “commoner” (of course the Indian High Commissioner met him at Barcelona Airport but it was limited to that!) So Baba ran to catch trains with us, stood in queue at bus stations, roamed the Las Ramblas and laughed at the human statues, wandered around the Boqueria in wonder, rode the tourist busses and horse buggies and ferries in Sevilla and Valencia and Madrid and whatever….. We even dragged him to the topless beaches in Ibiza, made him walk and eat any old trash we were munching on! End of it all, he admitted it was the most fun holiday he’d enjoyed in a long time……. So my mind is now planning the next big holiday again……but we’ll save that for another time.
All else was as hectic as it gets, as far as I am concerned at least, the girls’ schools, endless projects, cookery classes, roller skating, piano (yup, they are still reluctantly picking at it) singing etc etc etc. I’m trying to be less indulgent to Amisha who is turning out to be a little version of me, (translated, a little hyperactive wicked brat) and I’m trying to be more patient with Isha, who dances to a beat I cannot imagine, who is gentle and sensitive and lady like and more interested in accessories and perfumes and fashion than climbing trees and playing hopscotch. I must admit hanging on to my sanity and my work at times gets seriously tough, so I’ve somewhat given up. Yes, my work has suffered; there have been long gaps and frustrations and I’ve had my share of depressions but yes, I’ve been trying to accept things for what they are and fill my time doing one thing I like to do: writing. No, no big things, just enough to amuse myself and keep my mind away from all the times I’ve been sitting and wallowing in self pity…..
This year I’m going to change all that; I’ve decided to be more positive and assertive. So last week I look this huge sack and filled it with all the things I do not need. That included all the angst and frustrations and negative influences in my life. It included those relationships that are not going anywhere but make me sad or loose my cool, all that I feel I cannot take any more, those crying prying eyes that are bad for my soul and then I dragged that heavy sack into the sea and watched it go out with the waves….hopefully none of it will come back to me. Yup, I feel much lighter now!
Amitesh has been doing well, he’s also started on yoga…..and he insists pranayam is making him a calmer person…he says he doesn’t feel angry any more and is much more peaceful…I’ll just refrain from commenting on that for now…..
So it’s been a busy year but not without it’s share of fun, we “discovered” this beautiful hamlet in the hills of North Bengal at Tinchulley and managed two trips to Puri this year. The year end one was more special. It was the first time I’ve been to Puri in winter since I was, say, 12? And we also stayed at BNR which is where we always stayed as children. Memories flooded my mind…..cousins, friends, Baba, you were all there. Late at night I’d sit by the corridor and wish upon a ghost…. I kept seeing Baba everywhere but he wasn’t there. Maybe finally I have learnt to let go. Or maybe I see things in better perspective now.
Anyway dear friends who have come with me so far…listening to my ramblings from year to year, enduring my ranting and even being kind enough to post comments from time to time……and yes even you who never comment but read through my trash, I thank you all. And I wish you all a very beautiful 2011….full of love and peace and laughter.
Adios.
Posted by Ipsita Banerjee at 11:57 AM No comments: Links to this post