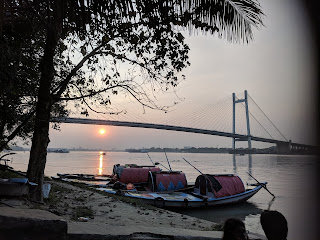 As you know, the river Bhagirathi-Hoogly runs through Calcutta, separating it in the west from Howrah. The Hoogly is a distributary of the Ganga (Ganges if you please) and separates from the main river near Giria, Murshidabad from where the Ganga flows into Bangladesh where it is known as the Padma. (From 1975 there is a man-made bifurcation of the river at Farakka.) But, Calcuttans know and refer to the river as Ganga. It is this river that accounts for all the rich silt and alluvial lands of Bengal, and has also often been said to be the reason why people in Bengal are generally lazy. You may know that the water of the river Ganges is sacred among Hindus. My ancestors, it is said, (and I have no reason to disbelieve it) actually also got rich packaging this river water and transporting it as far afield as South India and thereabouts all in nicely sealed cans!
That aside, when you are in Calcutta no visit is complete without a jaunt along the riverside. Thanks to the efforts of the government now one can walk right from the Princep Ghat right up to Babu Ghat. There is also a Millenium park further north right on the riverside and even a floating restaurant where the food is so-so but the views are gorgeous. Of course the jetties (there are many) have regular commuters from the western bank to the east and vice versa. Drift upstream and you will find the Dakshineswar Kali temple and Belur math. Downstream lies the Khidderpore docks and even further the wonderful mangroves of the Sunderbans. Two immediate bridges, the age old Howrah bridge (one of the third longest cantilever bridge of its time, as my father loved to tell me) and the more recent Vidyasagar Setu (usually referred to as the second Hoogly bridge) connect the city to Howrah and further west.
But one of the nicest things you can do is head to the river just as the sun is setting (or rising, if you are an early bird) and take a ride in one of the country boats. It's gorgeous. For me and my visiting friends, no trip is complete without at least one such ride. And the views are enthralling. One can end the visit with phuchkas and pav bhaji or jhaalmuri and why not an ice gola too? Wondering what on earth an ice Gola is? Here's a pic of some friends and I enjoying some ice goals (kalakhatta flavour) just two days ago! Yes, they were visiting. Tempted? 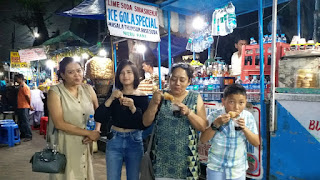 Posted by Ipsita Banerjee at 12:00 PM