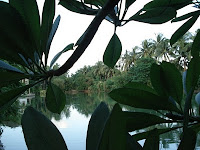 “Come down from that tree this instant, “ I shouted, “ the milk is getting cold.” A face petulantly peered at me from the leaves…..”how did you know I was here? And I had the milk!”
“Nonsense, you gave the milk to the dog. This is another glass.”
“But how do you know?”
I looked seriously at my daughter, feigning anger and suppressed a smile. The fresh litchi peels and stones on the ground told me where I would find that monkey…and the milk trick had been going on for days….
As I took the empty glass and turned away, I woke in my own room from the dream and had to smile.
How many times had I done this before?
I remember my own childhood when every holiday, more time was spent in water or on trees than on land, I had my favourite nooks, afternoons in the guava trees, specially when they were in season, mornings among the ripe litchis, it was easy to hide among the dense leaves but the pits always gave me away!!!! Pholsha season found me sneaking a ladder around in the afternoon, the branches were too light to take my weight but the laden branches with the tart sweet fruits were irresistible. Similarly in the hot summer sun we’d run about with an ankshi trying to pull down the aamras from the tree that was too high to climb and the fruits too high to reach with a ladder. Raw mangoes were stolen when everyone was sleeping possibly dreaming of ripe yellow juicy mangoes. And that hideout covered in bougainvillea where I crawled in with my story book and communed with the ants and other creepy crawlies and pretended I was miles from human civilization and hence could never hear anyone call specially if there was homework or some chore to be done. Jackie joined me…ah Jackie, The mongrel I adopted when she was just a pup, my faithful companion when I fell off a bicycle or went exploring in the ruins where everyone assured me there lived a snake…..I was as afraid of snakes as anyone else, but I couldn’t admit it, could I? So every now and then I’d venture in and climb up to the top and run back and pretend it was nothing while all the while my heart had been thumping against my chest and Jackie stuck close to me, tail between her legs,
The rest of the time I spent in the water. Swimming mainly, but also floating about and being ship wrecked, that sport Jackie was also dragged into the water, a true test of her devotion to me……poor soul often took to running away whenever she saw me making my “raft” which basically consisted of a plank of wood, an old tyre tube, some rope, a stick and a dirty rag. The game ended very undramatically one day when the rope came undone in the middle of the pond and the wood floated off and we fell into the water and Jackie had to swim frantically to shore. Days and evenings saw me turn lazy somersaults in the water, the sunsets were always colourful against the backdrop of the coconut trees…..and when the moon rose my world was lit with fantasy and dreams.

Of course life went on in the interim. Ma called and called and called. There were meals to be had, holiday homework to be done, tables to be learnt…..but in my world I was the sole explorer, a Peter Pan in uncharted Never Land discovering mermaids, pirates and crocodiles. Sums could wait, so could the world, my idyllic summers were…mine. Sometimes I was joined by cousins, sometimes friends, Often I was the bully defending my territories and making everyone toe the line……one favourite of mine (this was when I was older) was to get some non swimmers in an inflatable raft and assure them I would be there and taking them to the middle of the pond. Once there, I’d launch into this wild story of a monster that hid underwater and every ever so often would bump under the raft….which can be easily duplicated with a knee…..(I was heavily inspired by Stephen King!)…and then I’d pretend I was attacked and dramatically swim off underwater…. soon they would frantically want to go back….My father would order me to “stop that at once”. No I wasn’t all-evil. I helped them back all right and got my share of the scolding due to me but also could not stop smiling inside. After a while I tired of the game. Most people knew about it anyway. Fishing was fun when I used to sit with the rod and the reel but patience is not one of my virtues, never was. Moreover I was slow. It took me a while to realize that the fish I caught was being served for every meal. That’s when I rebelled, never caught a fish again in my life.
We had no TV. We had the outdoors. We had a cycle and a huge garden and all the freedom to explore every inch. We had earthworms, we had fireflies, we had ladybirds and butterflies. We skinned our knees and wiped away the blood without a thought of running to tell our mother for fear of tincture iodine that burns like hell and when we fell we never cried out. I remember being chased around the fields by my aged grandfather who wanted to put tincture iodine on a cut, I remember sneaking into the neighbouring houses from under the fence and always being welcomed with orange squash. In the evenings there would be a simple meal and we’d all sit around the table and share our day. There was warmth and there was conversation. Sometimes, after dinner, we’d play chess or scrabble or just read a book. Often, we would go for long walks in the night and my father would point out the stars and I’d gaze at him in admiration and now I desperately try to remember for that’s where he is but I was too self involved to remember then.
Oh we had school and all that, we had the city to return to but for our holidays we had Ranchi, we had the garden house in Murari Pukur and we had Madhupur, famous for its ghosts but that is another story..
Now I look at my girls and wonder. They have TV, they have computers that can download information in seconds so they never know the joy of hunting through an encyclopedia. They have cell phones that tell me just where they are and when they reached…hell, we ourselves never knew where our adventures would take us and when we were out, well, we were out. They have Nintendos and weird games, they have amusement parks. For us, the Ferris wheel at the Park Circus mela at puja time was enough. And candy floss. And if you teamed it up with pop corn our lives were full. My girls know all about international immigration and customs but they have never dabbled in the sand at the local stream where the clear water reflects every blade of grass and the most dangerous thing was the proverbial quick sand which we luckily never found. They have other dangers; we worry about too much time on the net, social websites, letting them out alone, bus rides, accidents and pedophiles. It’s not that the fears were less when we were small, every family had at least one pervert and we knew we had to steer clear of them. No, no one told us, we just knew. And we grew up despite all this and never thought about it….it’s just something you took in your stride.
We had the terrace, we had kites, we had the skies and we were our own masters. We had endless hours of making tea out of mud and water and making a mess. We played with our imaginations, and we bent them to our will.
Yes, times have changed. Holidays are organized; you don’t just all pile into a car and hit the road. There is no garden house to go to. When we go on holiday it is important whether there is a swimming pool and/or a TV, my girls have never been inside a pond. No, I don’t blame anyone, and as they say, the old order changeth….the new has many wonders too. It’s just that once in a while I feel nostalgic and wish those idyllic days were once more in my fist and I had my entire life to re live them!
C’est la vie!
Posted by Ipsita Banerjee at 11:01 AM 1 comment: Links to this post