My Dad and I had this little ritual, if you can call it that. In the morning, (provided I wasn't getting ready for school or otherwise frantically finishing homework), as he left for work I would walk him to the front door and see him off. I would give him a quick hug and a peck on the cheek as I said, "bye", and "have a great day!"

My father would be looking fresh and handsome, he'd be smelling of after-shave, (usually Old Spice), his hair would be wet, neatly combed back, his shirt would be ironed and crisp.

He'd stop and turn. He'd take hold my nose and my ear with two fingers of both hands, much like you would hold a jug by its handles, turn my cheek towards him and give me a kiss on my cheek.

Years and years have passed.
I would sell my soul to feel those cool lips on my cheek again.
Posted by Ipsita Banerjee at 11:19 AM No comments:

To my father on father's day... 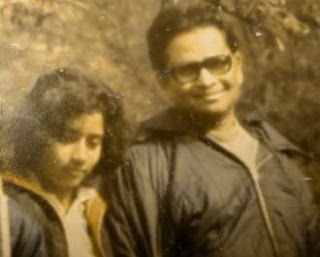 Dearest Baba,
My hands are empty. I have not bought you anything, not even a cake or a childish painting....

My daughters, (your grand-children) plan and whisper... they are so excited Father's Day is coming! I listen to them and nod encouragingly, feeling some of their excitement rubbing off on me.

Just some. Not enough.

For I have never celebrated father's day. Hell, when I was growing up, we had never heard of father's Day!

So why am I here? Why am I writing this?

Knowing fully well that I do not have you here with me, that you probably will never read this?

Lets see, maybe it's because I know what I DO have:


I have the dawn on a sea beach where we walked looking for sea shells.
I have early morning walks with the sun barely out where you would point out flowers and trees and tell me their names and I would never remember...
I have the biscuit crumbs in my pockets for the kittens and pups by the roadside that you allowed me to pet and feed and play with.
I have the sunrise in the mountains through the mist rising from among the pines.
I have the mornings spent doing Mathematics set by you each day because you believed that if I could do basic Maths, I could do anything. You were right, I think.
I have the daytime jaunts with friends wearing your shirts when you were at work because a wardrobe full of my own stuff was never as trendy or comfy as yours.
I have lazy summer holidays with great food and family for company at the garden house where our bodies would be tanned and black from too much sun and swimming and cycling.
I have afternoons of turning lazy somersaults in the pond while you inspected the grounds and trimmed the ivy.
I have another afternoon when you taught me to cook eggs and we made a mess of the entire kitchen which we then cleared up, giggling like conspirators before mother woke up from her nap!
I have your gentle discipline to guide me, when a frown from you was enough. It still is.
I have yet another afternoon when I had lied to you and I watched you as you struggled to keep the hurt out of your face and I swore then and there never ever to do anything that I would have to lie to you about and I have kept my word.
I have long evenings spent watching the rays of the sun as they set over the horizon even as the kites we were flying could no longer be seen.
I have evenings infused with the clear scent of fresh gardenias plucked from our garden.
I have summer nights walking in the clear night and having the Pole Star and Orion's belt watch over us..
I have swimming in the rain, in the moonlight, in a pool, in a lake, in a pond, in the sea......
I have lonely days and nights sitting alone in a strange hospital in a strange city watching you battle a cancer that was eating you whole.
I have lessons of strength for never once did I see your face cringe in pain as night after night I changed the dressings with my clumsy hands.
I have your eyes, tear filled with pain, but fighting still....
I have your voice, that still soothes me when I think I hear you call my name.

More than everything, I have your love.

And I have the memories....oodles and oodles of them...
They have served me well for the past 23 years. And I know will continue to give me solace for as long as I live...
And you know what?
I will not wish you on father's day because you cannot take a father's love and limit it to a day. It's forever.
Posted by Ipsita Banerjee at 12:40 PM No comments:

He has needed you from the moment he first saw you. At first the attention was light and flirtatious and you thought it gave you joy. Then he became more demanding, wanting to walk by your side and watch you while you were sleeping...till he became an indelible part of your life. He came along for movies and parties, even accompanied your family on vacations. Till you realised you are only one of his many conquests. He was hurting you and you had been fool enough not to see through it. He is eating into you, bit by bloody bit.
So you told him to leave.
But he wouldn't.
He'd sneak back into your life with false promises and placebos and you could not get rid of him. You know you have to do something about it.

It is evening, you are quietly sitting at the water's edge, deep in contemplation. It is time.
You rise, the water slides off your body as you shake your head and pull on a pair of shorts and a shirt over your wet swimsuit. It is completely still and the wind has dropped, nothing stirs. From behind you, where the house lies you can hear the sounds of your children as they animatedly discuss their day, bits of music come to your ears. You turn towards the house but pause and turn away following the narrow path among the overgrown grass. There is no birdsong, only an ominous silence as the stony old path twists and turns away from the house biting into your bare feet ... till you reach the ruin of the old out-house that no one ever visited. You climb the few steps, noticing how the weeds have choked the entire step and think nothing of it. Stones, bricks and broken walls greet you and you enter the cavernous dark. You know there are snakes that inhabit the ruins and you are afraid, but you know you cannot turn away. Not now.
You make your way in the semi-darkness till you reach the short stair-case. A narrow shaft of light falls from between the leaves of the Banyan tree that has made it's home on the outer wall. You climb the stairs slowly, your heart is beating wildly even as the stench of decay assaults you. You know what you will find.

There he is in front of you. Tall, misshapen and just as grotesque and ugly as you remember. To think that at one time you had found him attractive. He looks at you pleadingly, his eyes glimmer hope. The chains clank as he pulls forward but you know they will not give. He rattles his chains; he is, all at once, demanding and pleading and you  almost forget and give in. But something stops you. Maybe it is the recollection that he now threatens your world, your very existence?  He's always needed you, he is saying, he will never leave you.
But you finally have him locked up. You know that if he becomes strong he will once again run your life, he will once again ruin the life you have been clawing to reclaim. For, if he is strong, he will break the chains that bind him.
You look at him with loathing. Even pity.

So what will you do with this Knave, this killer, this terrorist who would riddle your home with bullets if he could?
Will you feed him?
Or will you let him starve to death?
Posted by Ipsita Banerjee at 4:48 PM No comments: