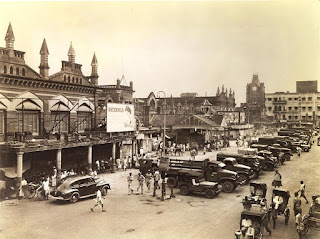 
Long long before there were fancy Air conditioned Malls and markets, Calcutta had it's very own "mall", in Lindsay Street, in the shape of New Market. They tried to name it Hogg Market after Sir Stuart Hogg the then Chairman of the Calcutta Corporation who contributed to its creation in a large was, but the name New Market just stuck. Initially opened to the public in 1874, primarily as a shopping centre for the British in Calcutta (yes, natives were not allowed to shop there!) it is now an iconic part of this old city. No matter what, despite the bustling Spencers and Big Bazars, I find myself returning, again and again, whether for the masala sausages or the ham or bacon or the Kalimpong Cheese or the delicacies from Nahoum! They say you can get anything here, you only have to know where to look!
As children we visited new market often enough. The best movie halls were also in the vicinity. I remember our excitement when denims first came to Calcutta. It was this brand called Avis, and their one shop was right below the famous clock tower which was brought over from Huddersfield in the 1930s. We got our new jeans and ate rolls from Nizam's (another land mark hotel nearby!) and ice cream and were happy.
Simple pleasures!

Posted by Ipsita Banerjee at 11:02 AM