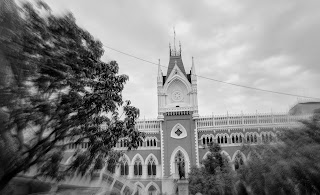 I've always been fascinated by ghosts and ghost stories. Calcutta abounds with such stories. And the High Court building in Calcutta is as good a place as any to catch these elusive spirits!
The High Court at Calcutta was established in 1862 and is India’s oldest Court building. Construction of this beautiful neo-Gothic building (based on the Cloth Hall, Ypres in Belgium) was completed in 1872, ten years after the High Court was established. All kinds of cases, including criminal trials were heard and adjudicated here. It is an old heritage building and as with most historical buildings, the High Court building is considered by many to be one of the most haunted places in the city, with rumours floating around that some corridors are avoided even during the afternoon!
While looking up ghost stories of the time I find that apparently there was a newspaper article in the 1980s which talked about how bloody footprints appeared from nowhere on the second-floor stairwell and abruptly disappeared into one of the courtrooms, with no signs of them thereafter. There is this other story of how a British judge spotted his wife while working late into the night while she was supposed to be in England. Soon a telegram arrived to announce the fact that she had died at the time of her appearance. There are court employees, lawyers, visitors and night guards who have, over the years, claimed to have seen a lady moving around the corridor. Is it the ghost of the British lady, or the relative of someone who was hanged to death in the Court premises?
They say if you listen carefully, late in the evening one can hear the rattle of chains of  criminals or the cries of others who wander these halls, still searching for justice.
In all my years in the High Court I have had occasion to stay back till pretty late.
Once after a long winded arbitration, I was walking down from the second floor library where we used to sit. I was alone. The Court building was deserted and empty. The lights were low. After Court hours certain gates are locked so I had to take a circuitous route to find a gate that was still open. As I walked down that long arched corridor between court room no 8 and court room no 1, I thought I heard footsteps behind me. I stopped, hoping it was someone I knew so we could walk together. But the footsteps stopped too, the gloomy corridor was empty. I continues walking and heard those footsteps again. As I reached the staircase to the ground floor, the footsteps faded. I walked a little fast .. faster than necessary to the waiting car.
A prankster, or a ghost?
Truth? Or fiction?
I’m not telling but there are now walks in Calcutta that take you through historic and old buildings at night, including the Calcutta High Court, in the hope of spotting some of the ghosts of Calcutta (trust me, there are many!)
Coming?

Posted by Ipsita Banerjee at 4:58 PM