As a mother of two teenage girls, just over a year apart, sibling rivalry is nothing new in our house-hold. In fact I live with the constant steady hum of 'shut-ups' and 'I will tell' which I have trained myself to turn a deaf ear to.
When they were small, if one climbed onto my lap, the other one would want space too. It was kinda cute. They slept under the crook of each arm and there I would be lying flat on my back, staring at the ceiling, unable to sleep, feeling like a beached whale and thank my stars that I did not have another baby! As they grew their interests widened. They wanted the exact same thing their sister was having, forcibly extracted from the mouth if need be. Yes, it was still kinda cute, I'd dress them similarly, buy them the same stuff in different colours and feel blessed. 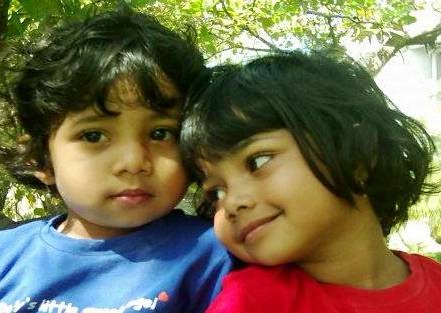 They were cuddly and cute and loved each other to bits. Or so I thought.

Till Amisha, the younger one, discovered the photo albums. One day I returned home to find this particular child sitting among all the photo albums which she had dragged down from the shelves crying profusely. Big sobs threatened to burst the dam of quivering lips while her sister sat and giggled evilly.
"Isha didi has picture albums without me but all my albums have Isha didi in it!" was the complaint.
I burst out laughing....what else could I do?

That was the beginning of the end. Since then, not a moment goes by when either will pass up a chance to take a dig at the other. If either is within arms length or kicking distance, something is bound to get pulled or pinched or worse. The verbal diatribe is incessant.
Of course they are friends too. They whisper together and make plans to "get mother's goat" and cover for each other when they are on the phone or not studying when they are supposed to. I cannot imagine which is worse: their friendship or their rivalry.....

Now during one of these periods of love and sisterhood, they have devised a rule. Anyone who says "I said it first" ( it has to be spoken or hissed very quickly, like it's one word) gets whatever it is they both want. So here you are sitting down for dinner and I ask one child to pass the salt. She does but her mouth says " I am having the leg piece, I-said-it-first!" And its not relevant to the situation . You could be having dinner and one would hiss "I get the big pillow tonight. I-said-it-first!" or "I sit in the front seat, I-said-it-first!" or even, "I get the remote, I-said-it-first!"
Ouch.
It's endless, its intolerable, I feel like my whole life is going down-hill in a chorus of "I said it first!" they argue about everything: shoes, clothes, chocolates, boys, music, TV shows, tests, school friends, shampoo, the list is endless. No, nothing can escape the thunderclap and rumble of their arguments.

So every now and then when I have had enough of hunkering down in my room pretending not to hear them, I want to scream:
"Can we have some peace and quiet now? I said it first!"

Posted by Ipsita Banerjee at 2:01 PM No comments:

My father was a simple man. He believed that if you knew cycling, swimming and could do Maths, you would survive life with nary a hitch. Strangely enough I took to all three. Cycling, of course led to bikes and later to cars and I am happy to say I do not have to depend on the driver or the spouse if I have to go anywhere which has led to a lot of peace in my marital life. So I learnt independence. Swimming is fun, one of those things I enjoy doing particularly when I just want to shut the world out and retreat into my "happy space". I learnt to keep myself occupied. And Math. Well. lets just say I did well enough in Math when I had to. And I was able to impart some of that knowledge to my kids. I hope. And to be frank, every now and then I like working out algebraic simplifications...it helps me think clearly (yes, even my daughters think I am strange!) So I learnt...logic? I'm not sure what I learnt here, but yes, I can do the Math.
Now my father had a fourth testament that I have not mentioned. It was "putting things back in their proper places". For the sake of brevity I will call it PTB. This was something, to say the least. I was constantly berated, bullied and taught. For the life of me I could not remember to PTB, or so I thought.
My father was obviously master at this for, miraculously, now I find that is one skill I am quite adept at. Here I am in some shop looking for a credit card which I am certain is inside one of the multiple flaps of my XL handbag. I churn through it all, half the contents of my bag are out on the counter and I am certain I have lost the card. The shopkeeper looks at me haplessly, more than a little bit disgruntled. As a last resort I look in my purse. There sits the card. At its place carefully perched in it's slot. I am surprised.
Or take this. I am home, it is 11  pm. the elder daughter has misplaced a button of her shirt and MUST have it tomorrow at school. (Of course you can only remember these things at bed time!) I rant. I check all the drawers: there are no buttons anywhere. I knew I had some, in a packet, all kinds of buttons and the like. Despondently, I pick up the needle box. There it is, the packet of buttons, exactly where it should be. It fascinates me!
Now my father was a much better parent that I ever will be. Or aspire to be.
For my girls can swim but cannot cycle to save their lives and Maths is something smelly that should NEVER be touched!
And as for PTB, why, they have no clue. I never know where my things will turn up, funnily, neither do they. As the result, the scissors, the cello-tape, the glue-stick are never where they are supposed to be. Their shoes are everywhere except on their feet or in the shoe closet and I am eternally tripping over them. And I am convinced the objects in my house have a mind of their own. You tell one daughter to "put the book back on the shelf." She picks it up apparently to do the needful. Now that book will turn up in odd places for the next few days, until, with a grunt of exasperation I will pick it up and return it to it's proper place. And this hold true of most things in the house. I am constantly yelling at them to put things back after they've used them, but I may as well be talking to a wall. Or two, if you like.
It gets my goat.
Like, today: the girls are away at school. I have oiled my hair, a shampoo is in order. I am in the shower when I realise there is no shampoo in the loo. There are only six conditioners and two old empty shampoo bottles which of course no one else will ever throw because it is my sole and bounden duty to do it. I work it out. Obviously. The shampoo is in the other loo. Why? Because one of my darling daughters have taken it there and has not bothered to put it back. That's why!
So there I am. I get out of the shower, dripping water all over the place, pull on my night shirt and pad down the living room through the guest room to retrieve a shampoo that should not be there in the first place. And it's cold.
Boy, am I mad!
Now it's time for the 'little darlings' to come home. I am waiting for them.
Boy, will they get it!
Posted by Ipsita Banerjee at 3:08 PM No comments: